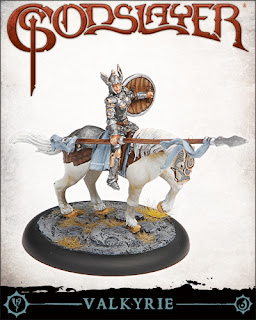 Although the Valkyrie was blown of course by the winds of fate, she has now made it to the battle!

Just in time to bring some needed support to the Nordgaard. Yes, we had some challenges getting this one exactly how we wanted it, and so she is being released a few weeks later than planned... but better late than never.

I think you will agree that such a great lady is worth waiting for.

This herald of the New Gods has powers to heal and even resurrect models.

Not only that, she's also pretty handy in combat with her quick movement, 2-inch melee range and ethereal rule.
Posted by Megalith Games - EN at 11:20 AM